Book Review: The Other Side of Truth by Paul Kimball

The Other Side of Truth:
The Paranormal, The Art of the Imagination, and the Human Condition
by Paul Kimball

Above all, this was a fun book to read. Paul is a good storyteller, and can flesh out his experiences and theories in a very entertaining way. This is not about hard science and proving the paranormal. This is about experiences, and the bigger picture. Throughout this book, you get to know Paul a bit. His personality shines through, and he is not shy with his opinions. The essence of the idea here is that the paranormal, in it's many facets, is a work of art of a higher intelligence. That may sound a bit odd, but as you read through, and Paul clarifies what he means by art, it makes more and more sense. In this sense, art is communication. Paul covers ghosts, UFO's, shadow people, synchronicity, alternate universes, the observer effect, reincarnation, and much more. It all kind of interweaves.

Paul discusses his TV show, Ghost Cases, and suggests that ghosts are not what the general consensus believes. He has some pretty fascinating experiences, and you get to follow through his mindset and how it leads to this bigger idea. Throughout it all, you will also get a bit of more obscure history thrown in here and there. He covers an array of synchronicities that happened to him over a short period of time, and what it meant to him. Interpretation is key in the paranormal. And this is a fresh and thought proving way to view it. There is a chapter on time travel, for example, that serves as much as anything, as a thought experiment, and suggests some new ideas.

Overall, if you are interested in the paranormal, and have a somewhat open mind, pick up this book. You will likely enjoy it. If nothing else, it may get you thinking about things in a different way.

Also check out my interview with Paul Kimball on Where Did the Road Go? from April 20, 2013...

Posted by Unknown at 9:02 PM No comments:

A Point in the Center 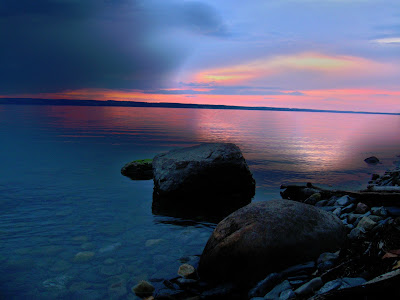 A point in the center. They all are. There can be nothing else. Yet, there is no center. No space to center in. Yet, there it is. Tendrils move out in all directions, yet only one they pay attention to, and they forget the others, too much with just one, after all. So much coming into that non-centered point, too much, blinding, overwhelming. Wonderful in it's ineffability. But just that one tendril, can be nice. A vacation down the path. Sometimes, though, the path is long and hard, and they know this, but fatigue wears, and they forget. They forget the center that is not a center. They forget the non-space, and all they know is the tendril. This is fine. It really is. In the end, the only place to go is back to the center. Or better yet, off to make a new center. Like children spawned in some infinity, some star burning bright in the depths of space. The stars are alive. The universe is alive. Existence is. It is life. Consciousness. Centers. Tendrils of probability and time. Ever creating, ever expanding, yet all that is, is already. Yet, it can still be more. Fantastic vistas of ever moving, ever changing, ever evolving, ever growing points. Lights to light up the sky. Constellations to light the way.  Always more than before. Infinite space in the creative world. A mind forever voyaging, moving in all directions, exploring, learning. No beginning, no end. Simply there. A point. In the center.

- Seriah
Posted by Unknown at 4:37 AM No comments:

Book Review: Man-Made: The Chronicles Of Our Extraterrestrial Gods by Dr. Rita Louise

Man-Made: The Chronicles Of Our Extraterrestrial Gods

This is an interesting read. It is not bogged down by a ton of repetition or unnecessary details. In short, it is an easy read, with a lot of information packed in. What the authors attempt to do is break down our history as told in the common elements of our shared mythologies. Taking primarily from India, Egypt, Australia, and the Americas, they show a surprising amount of common elements, which makes one wonder just how that is possible since these cultures were supposed to have built up independently. Some of the similarities are rather startling, but others could be dismissed if it weren't for the sheer amount of them.

Rita and Wayne put together a potential history of our far antiquity, and break it down to different worlds, leading up to the current one. For someone familiar with mythology and ancient astronaut theory, some of this material will be familiar, but they are able to dig up some novel pieces of information, and the overall theory is rather unique. It is also at odds with some accepted notions, and overall gives some good food for thought.

It is not a scholarly work. There are no footnotes, and it is not written in a dry manner at all. It flows nicely, reads well, and keeps your interest. It's not likely to change your world, but it will entertain and perhaps create some more questions that would be fascinating to answer. If you are not familiar with the subject, this is a great start. If you are, you will still likely find it interesting, especially after it gets moving along.
Posted by Unknown at 4:24 AM No comments:

LightQuest: Your Guide to Seeing and Interacting with UFOs, Mystery Lights and Plasma Intelligences


There are plenty of UFO books out there. More than you can probably count. Most of them do not offer anything new, if they offer anything at all. The majority of them are stuck in the extra-terrestrial paradigm. Through the years, there have been books in the field that stand out, notably the work of people like Jacques Vallee, John Keel, John Mack, Whitley Strieber, etc. The people who were willing to try and truly understand the phenomenon.

I believe that Lightquest from Andrew Collins belongs on that list. Is it the definitive book that clearly explains everything? No. We may never have that. But this book, may very well be a step in the right direction. Expanding primarily on the work of another novel researcher, Paul Devereux, Andrew proposes that what we see as space ships, fairies, etc, are really plasma formations. This is not a new idea, although it is not a well known theory, where Collins differs, is he proposes a definite intelligence behind the phenomenon. He suggests a combination of altered states of consciousness, and what he calls a 'bubble reality' to explain what is happening to people who come in close contact with these plasma intelligences. He starts the book by debunking Roswell, the flagship of the ET Hypothesis. Following that, he explores areas that have earth lights, probable plasma formations, that show up regularly, such as Marfa, Texas. He then takes it deeper into UFO territory and explores encounters and how strange they really get. He deals with cutting edge science to try and understand what we may really be experiencing, rather than what it looks like on the surface.

Like all of his books, he shares information you will not find anywhere else. He shares some personal accounts and some never before published accounts that support his theory. He even, at the end, takes a look at the Rendlesham case.

All throughout, as he explores 'window areas', UFO hotspots, and why they may be such, he also gives you tips if you wish to visit them yourself, and where you are most likely to see something. Personally, I have been a fan of Andrew Collins for a long time now, and the majority of his books have had to do with archaeology and lost civilizations, but there are a few exceptions, like this. He has never disappointed me. He always has something worthwhile to share when he authors a book, and with the number he has out, that is quite impressive. This one is around 400 pages, detailed, well written, easy to read, and just packed with information. There is even a brief Q&A section at the end just to clarify some of the points in the book.

If you are at all interested in the UFO Phenomenon, you owe it to yourself to read this book. Even if you disagree with his overall theory, I can almost guarantee you will get something out of it of value.

You can find out more about Andrew Collins at his official website.
Posted by Unknown at 12:18 AM No comments:

Where I am coming from...

All my life I have had an interest in science, history, and the paranormal. It has taken me down many paths, and I have had more experiences with such things than I can even recount at this point. I look at everything as a true, open-minded skeptic. I am a big fan of the work of (in no particular order); Aleister Crowley, Jacques Vallee, John Keel, Graham Hancock, Andrew Collins, Jane Roberts, Whitley Strieber, and Robert Schoch, to name just a few.

I also now host a radio show dealing with these subjects, and connected with this blog. It is called Where Did the Road Go? and it airs on Saturday Night at 11pm Eastern on WVBR in Ithaca, NY. It also streams online and is archived on the page.